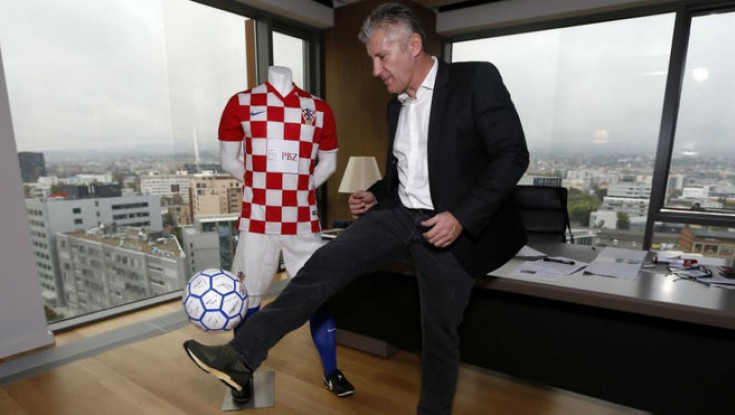 ew know what it's like to win to win the Champions League as a player but Davor Suker is one such indiviual, and the former Real Madrid star believes his former club will be present in Kiev for the 2018 final. The Croatian was part of Los Blancos' seventh European Cup win and remains a popular figure in the Spanish capital.

He spoke exclusively to MARCA and detailed just why he feels that the defending champions are destined to overcome Paris-Saint Germain on Tuesday.

You know perfectly well what it's like to win the Champions League with a team that's struggling in the league, how does it work?

"The Champions League is different from everything else, the anthem, the atmosphere, if Real Madrid are strong physically then they can beat anyone. This was demonstrated in the final against Juventus, many people spoke about Juve's defensive power but in the end they did nothing. I hope that Real Madrid are in the final in Kiev."

Two weeks ago, Los Blancos were in a close game against PSG but ended up winning with a two-goal advantage, what does this team have to do in order to transform itself for the big games?

"The players are more or less the same, they have hardly changed. When the players hear the anthem, their mind is immediately focused, on Tuesday and Wednesday nights they perform better, they understand that it's their competition, that's what happens with Real Madrid."

Do you think Real Madrid can win the Champions League again?

"In football everybody looks to the team at the top, it's not easy to be at the top for so long and the players know this. There are many teams who want to take Real Madrid down, there are also clubs who believe they are favourites on paper, yet Los Blancos never fail, that takes a very strong mentality."

What is the difference between Real Madrid and the rest?

"The mentality. The key is to have the ball, move it and perform well on the night. They must play as they know and then the difference becomes clear."

Why are Real Madrid doing so well in the Champions League but so badly in LaLiga?

"You have to ask the coach, I don't want to give advice because I fully trust the work Zinedine Zidane is doing and I wish Florentino Perez would give him a new contract."

What do Real Madrid need to do to eliminate PSG?

"Madrid will score at least one goal, but they must play as if the first match had been a 0-0 draw. PSG have great players who can cause damage, but Los Blancos players know how to progress through a tie, the first leg was important for them psychologically."

Are there any similarities between the current team and your Real Madrid?

"You can't compare the two, football changes every 10 years, you just need to look at the ball, the pitch, there aren't any matches with mud and water anymore. It's completely different, this current Real Madrid team has such talent, I'm sure on Tuesday we'll see an even stronger team than in the first leg."

Has football really changed so much?

"Yes, yes, completely. Every time I watch a match, I realise just how much has changed, the game moves in 10 year cycles. We still ran 10-12 kilometres per game, but now it's more physically demanding, the players are of the same quality, although now there are average players who don't perform in the league, maybe that's one of the causes of what happened to Real Madrid."

Is it difficult to maintain concentration across so many matches?

"UEFA are talking about the health of players, there are discussions about a fourth substitute, but in the end football can be damaged. Real Madrid can beat anyone, but in the league it's another issue."

What does Neymar's absence do?

"This is simply football, Real Madrid may have numerous players injured and nothing is said. Neymar is a great player, one of the best in the world, but another will replace him. It seems likely that it'll be Di Maria, he will do his best."

Another one of your old teams, Sevilla, are in action against Manchester United, what do you think about their chances?

"For Sevilla, European competition is now starting to feel like home. They play and they enjoy their football, it's a pity they didn't score in the first leg. De Gea made a fantastic save to keep them out."

What would your prediction be for the Champions League final?

"I'll tell you after the quarter final, but Real Madrid will be qualified and I see them reaching the Kiev final."