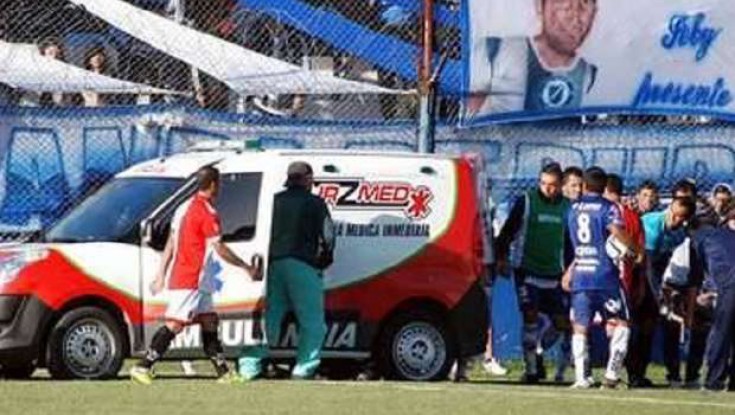 11:39
202074
| A A A
Share
Argentine footballer tragically dies after catching knee to the head in freak on-pitch accident

The player, identified in local media as Michael Favre, fell to the ground while battling for the ball against opponent Geronimo Quintana.

An Argentine footballer has tragically died after colliding with another player and catching a knee to the head in a freak on pitch accident.

The player, identified in local media as 24-year-old Michael Favre who played for San Jorge de Villa Elisa in Argentina's Entre Rios province, fell to the ground while battling for the ball against his Defensores de Colon opponent, Geronimo Quintana.

Quintana appeared to accidentally knee Favre in the head while the two tumbled to the ground.

Favre got up after the collision, but was then knocked to the ground by a third player, identified as Favio Larrosa, who appeared to hit him in the head with his forearm.

Favre struggled to get up for a second time before falling back to the ground and appearing to go unconscious.

The player, who local media reported was the father of two, was taken by ambulance to a local hospital where he was later pronounced dead.

The Argentine Football Association released a statement shortly after to offer condolences to Favre's family and his club.

"The AFA expressed his condolences for the death of Michael Favre, San Jorge player of Villa Elisa, and sends its support for the family and the club.

"The Argentine Football Association expresses deep sorrow over the death of Michael Favre, who plays for Club San Jorge, which occurred while playing against Defensores.

"This association also expressed support for the Favre family, and also the Club San Jorge."